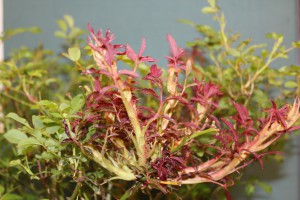 Rose Rosette Disease was first discovered in California and Wyoming in 1941. It began to spread to the Midwest and was found in the flower farms of Tyler in the 1990s. In 1998, it presented itself in the Dallas-Fort Worth area. It appears that it is mostly confined to DFW and surrounding counties in Texas.

Observation of symptoms on rose specimen is important to prevent the spread of the disease to our roses. Some of the symptoms include a red pigmentation or discoloration of the leaves, excessive thorn production which often resembles prickles, and excessive cane size. There may also be leaf pigmentation and malformation.

One of the most significant symptoms may be what is called a “witches broom”, a stem with bunched growth or elongated stems with flowers that do not open. Not all infected roses will necessarily exhibit all of these symptoms. It is important to avoid confusing the normal reddening of new leaves or excessive branching caused by heavy pruning. 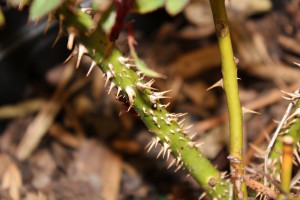 The disease is spread by eriophyid mites that enter the tissue of the plants. The mites themselves do not harm the plant but they carry the disease to the roses. The mites are easily transferred by the wind, on clothing, infected pruning instruments, insects, and by crawling from rose bushes that touch each other. The mite that carries the disease injects a toxin that attacks the DNA of roses and thus causes the symptoms.

The virus will spread to the entire plant and eventually the plant will die. It may take up to three years for that to occur. The mite will die if it cannot feed on live roses within a week.

Researchers at Texas A&M University are busy looking for ways to control the disease, but it is still fairly new in this process. It appears that there is no one variety of roses that are immune to the disease and there is no research to show that a miticide or dormant oil will control RRD. For now, one of the best things we can do is to attempt to prevent the spread of the disease.

When RRD has been diagnosed, complete removal is suggested. Bag the rose bush first, if possible, and dig out the roots from the ground as they can be infected as well. Do not put the diseased plant in compost piles. Bagged plants should be fine in landfills. When the plant dies, the virus and mites will die as well.

Since the soil is not contaminated from the mite, the empty hole can be replanted quickly. If roses are replanted, it is suggested that there be adequate spacing between plants so that they do not touch once they have matured to avoid spreading of mites. Prune heavily in the winter (February).

Pruning diseased plants does not help “cure” it of the disease. It should be replaced. Some cities, churches, and colleges in the DFW area have opted to remove all of their roses with the belief that all may be infected. That will be a decision you need to make in your own garden.

It is unlikely we will ever eliminate RRD, but we need to attempt to reduce the number of infected plants and use the best management techniques available for now. Unfortunately, researchers will not have a quick solution to this very disturbing problem. It does not mean that we should stop planting roses. However, let’s remember there are other great colorful options to use in our landscapes along with roses.